Back  in Oriental, NC we did not have to worry about tides or currents.  Not the case in South Carolina where we are seeing tidal ranges of 7′!

Our trip from Georgetown to McClellansville was delayed for 2 hours because we had to wait for the tide. By starting at 10am we rode the current most of the trip and had extra water under our keel to help keep us from running aground.

We stayed at The Leland Oil Company docks for the night.  It seems all of the towns on the ICW in South Carolina have cute old houses along the water way.  McClellansville is a shrimping town and at 7:30am the boats were heading out to work.  Our tide window said this was the time to go so we got in line with the shrimpers and headed to Isle of Palms, just north of Charleston.

We loved Isle of Palms Marina.  They put us on a dock just past the restaurant away from lots of traffic with a good view of the ICW.   Morgan Creek Grill is the on site restaurant.   We stayed at IOP for 5 days and ate at Morgan Creek 4 out of 5 days.  To be fair they had live music, happy hour and a $5 bar menu Friday, Saturday and Sunday.  We did not use the stove or oven the entire time we were there.   IOP is a 20 minute Uber ride to old Charleston and a 4 block walk to the beach.

Normally we try for journeys of 25 miles but our trip to St Johns Yacht Club was only 16 miles because we would be crossing Charleston Harbor, dealing with 2 draw bridges and going through Elliot’s Cut.  Our stress level goes up when we deal with any of these issues by themselves, multiply this day by 4 and you can see what we mean.

The tide and the Ben Sawyer bridge said to not leave before 9am which meant we could sleep in and have coffee before we left.   Passing through the bridge and crossing Charleston Harbor was really uneventful.  The harbor was calm and except for getting rock by the waves from other boats we did ok.

With a 7′ tidal range when the water goes through a bottleneck it can really speed up.  This was the problem with Elliott’s Cut.  The current can be so swift that lightly powered boats are not powerful enough to go through the cut.   There is also a shoaling issue going through any cut.   By leaving on a high tide that was ebbing into a low tide we had the extra water height to prevent running aground and the current to push us along.

How fast was the current in Elliott’s cut?  Checked Out will normally do 6-6.5 miles per hour when not affected by the current.  We hit 10 mph going through Elliott’s Cut!   And they put the Wappo drawbridge in the middle of the cut, no stress there.   Besides going faster than the boat is supposed to go it was fun trip.

St. John’s Marina was 1/2 mile from the exit of Elliott’s Cut.   St. John’s is a very nice Marina on the southern side of Charleston.  The folks are friendly and we enjoyed our stay there.  We noticed that there were a lot of bicycles parked along side the docks.  We soon discovered that the closest parking lot was inaccessible due to a local bridge that had collapsed.  All the people who were liveaboards would ride their bikes the long distance to their cars.

We left St. John’s without incident the next morning for our longest trip so far, 44 miles to B&B Seafood.  This is a quiet place to tie up on their fuel dock for the night.  We did not hook up ac power to our boat so we slept without air conditioning for the night. They sold fresh shrimp caught the night before for $7 a pound.   The trip went well except for the 7 miles of the Endisto River.  The wind blew 18 mph on the nose with the current with us. This means it was windy, choppy and uncomfortable.  B&B also sells beer for $2 a bottle, we felt we earned it!

Early the next morning we left the dock at 7am with the current and without incident. Our journey was the Ladies Island Marina in Beaufort.  The water depth in Fernwick Cut was skinny (shallow) but we were fine.  The depth finder only went to 0 once but we did not touch bottom.  Most of the scenery on the ICW in South Carolina has been lovely.  We’re seeing lots of marshes and tons of dolphins.

We only spent 2 days at Lady Island and could have easily spent more time there. Steve the dock master is a very nice guy, Grayson’s Hardware and Bills Liquor store are 3-4 blocks away and have to be seen to be believed.   We were a little embarrassed at Bills when the clerk ran our credit card and said “this card has already been used here today!”  We forgot something, give us a break.   Downtown Beaufort was just a short trip across the Lady Island Bridge and is a very cute little downtown.   Personally I thought the stores were more sophisticated in Beaufort but I liked the houses in Georgetown better. 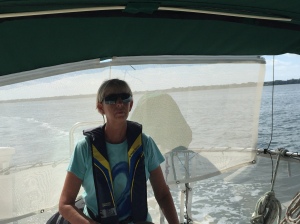 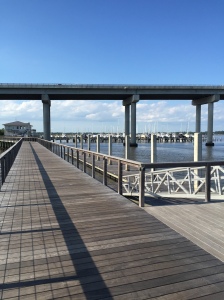 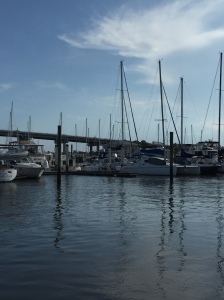 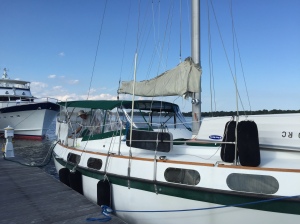 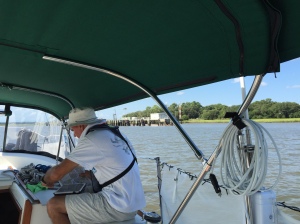 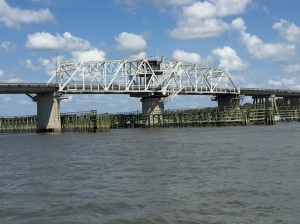 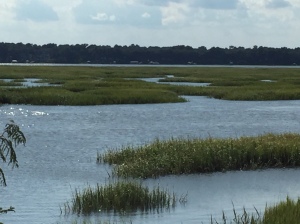 2 thoughts on “Hopping down the South Carolina coast”

Click a picture to follow Jan, Matt, & Scout as we live and sail on Checked Out, a Morgan Out Island 33